Evesham Rambling Club was founded in 1947. Throughout the decades since then it has maintained its reputation as a welcoming and friendly club which offers well-organised walks.
We are an independent walking club, affiliated to the national Ramblers.

In 2000 we walked the Heart of England Way. ERC member, Paul Wood, wrote about it and humorously recalled the first visit of Evesham Rambling Club in 1947 on its very first walk.

“…… on to the Coach and Horses at Longborough. The pub occupies a sacred spot in ERC legend, for it was here, on April 27 1947, that the first ERC Ramblers descended upon the earth and sat upon the right hand of the landlord and quaffed his ale and ate his swine. And, lo! a photograph of that hallowed throng did later mysteriously appear and it doth remain there today for all to gaze upon in wonderment thereof.”

Sadly the old photograph is no longer to be found at the Coach and Horses. 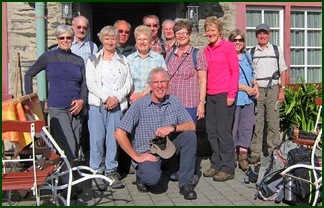