There are no major issues with the route at present.

If you discover a problem with this walk let us know using the Contact Us form.

Terrain: Riverside and field paths, tracks and roadside pavements. One short climb up steps after Hampton Ferry. If the River Avon is in flood, there is an alternative route indicated in the walk details. 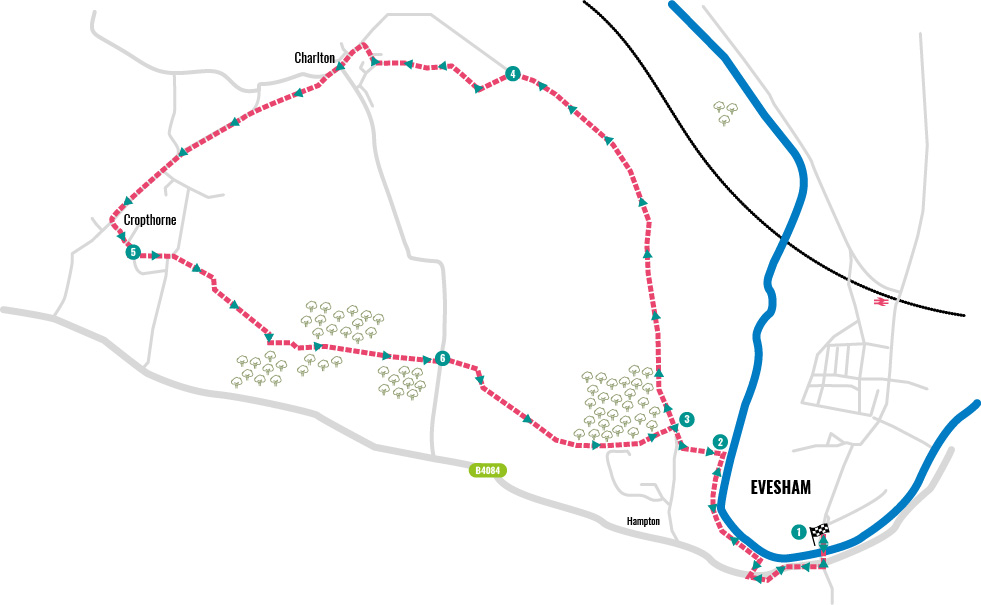 Details of the Walk

1. From the river end of the car park go up the steps and cross the bridge to Pershore Road. Turn right and walk along the pavement until you reach a footpath on the right alongside the River Isbourne.

If the rivers are high, continue along Pershore Road, then fork right into School Road and follow this to Point 3 in the instructions.

Follow the riverside path to reach the River Avon. Turn left and follow the footpath on the river bank. When the path turns from the river, continue to follow it to the right by a kissing gate.

2. On reaching the house at Hampton Ferry, turn left up the slope to go under a disused railway line.

Hampton Ferry is a rare surviving example of a manually operated chain ferry. It was established by the monks of Evesham Abbey to access their vineyards on Clark’s Hill.

3. This soon becomes a track which you will follow for just over a mile, ignoring any turns to the left or right. Over to the right you can see Abbey Manor on the hill, standing above the site of the Battle of Evesham (this is on the route of the Round Evesham Walk). On your left is Eove’s Wood, planted by the Woodland Trust for the millennium. As you walk further along this track, Bredon Hill and the Malverns come into view over to the left.

The track becomes a lane again – Ryden Lane. The famous Moorcroft pottery has an Evesham Collection and the designs for this are based on its Chairman’s childhood memories of living in Ryden Lane.

4. Just past the first house on the left, turn left through a kissing gate. Descend to a kissing gate and footbridge and follow the path alongside the stream to reach a lane (The Bight). You are now in the village of Charlton. Turn right into Brook Lane then left at the T-junction.

The stone building on your right is a small simple church converted from a barn in 1872. The dovecote that you pass is all that remains of Charlton Manor.

At the end of Ryden Lane, cross to The Green and check out the bus shelter with its unique paintings by local artists. Now make for the small bridge across the stream. Turn right to go through a wooden kissing gate. Follow the path up the steps and to the right. Cross the open field to the road and turn left to walk up into Cropthorne.

Cropthorne is an ancient Saxon village. In the 8th century Offa, King of Mercia, had a summer palace on the site of Cropthorne Court which is situated next to the church. St Michael’s Church dates from around 1100 and inside there are 14th century wall paintings and fine tombs belonging to the Dingley family. In the churchyard is a Saxon Cross dating from around 800. The village has many fine buildings and you’ll pass Holland House, built in the late 16th century and now a Christian Retreat Centre open to people of all faiths.

Continue down Main Street and just beyond Holland House, turn left up Middle Lane. The last house on the right is The Autonomous House, an ultra low energy eco-build, completed in 2013.

5. Ignore the first footpath on the left and take the second one through a gate and then between garden fences. After a second gate, follow the hedge on the right to come out on a lane. Turn left and then take the footpath on the right to follow the clearly defined route across the field. Beyond the fence, turn right. When you get to the gallops, go through the fence gaps to reach the open field. Go diagonally left down the field to a ditch crossing in the corner. Follow the right hedge and then the broad track between the line of trees. At the end of the track, go up to the right and through a kissing gate and continue to reach a lane. The orchards here are a delight during the blossom season.

6. Cross the lane and continue in the same direction. Turn right beyond the hedge and then diagonally left towards the large barns, crossing a footbridge. Follow the track up to the left of the barns and where it bends to the left, turn right and then immediately left. Go through the kissing gate and continue in the same direction to reach the lane that you followed earlier in the walk. Turn right and then take the footpath on the left to retrace your steps to Hampton Ferry and back along the river. The ferry is seasonal and if it is operating, you have the option to cross on the ferry and turn right along the riverside back to the car park.

This is one of five circular walks to choose from based in the Vale of Evesham.

The walks are managed and maintained by Evesham Rambling Club as part of a project to attract walkers to the area.
Each walk is supported by a leaflet and is waymarked throughout. A QR code on the waymarker discs allows you to access details whilst on the walks.

Click on the word DOWNLOAD below and your browser will open a printable version of Evesham Vale Circular Walk 5 leaflet.

This website uses cookies to improve your experience while you navigate through the website. Out of these, the cookies that are categorized as necessary are stored on your browser as they are essential for the working of basic functionalities of the website. We also use third-party cookies that help us analyze and understand how you use this website. These cookies will be stored in your browser only with your consent. You also have the option to opt-out of these cookies. But opting out of some of these cookies may affect your browsing experience.
Necessary Always Enabled
Necessary cookies are absolutely essential for the website to function properly. These cookies ensure basic functionalities and security features of the website, anonymously.
Functional
Functional cookies help to perform certain functionalities like sharing the content of the website on social media platforms, collect feedbacks, and other third-party features.
Performance
Performance cookies are used to understand and analyze the key performance indexes of the website which helps in delivering a better user experience for the visitors.
Analytics
Analytical cookies are used to understand how visitors interact with the website. These cookies help provide information on metrics the number of visitors, bounce rate, traffic source, etc.
Advertisement
Advertisement cookies are used to provide visitors with relevant ads and marketing campaigns. These cookies track visitors across websites and collect information to provide customized ads.
Others
Other uncategorized cookies are those that are being analyzed and have not been classified into a category as yet.
SAVE & ACCEPT