During a very wet June week, 11 brave souls set off from The Blue Bell in Callow End, Worcestershire. The mainly flat walk took us through Pixham to Clevelode, following the River Severn southwards, then back to the pub for lunch, where we were joined by Frank.  Views of the Malverns were enjoyed, but a few walkers got very wet thighs due to the wet crops.  However, they coped!

After a very pleasant and filling lunch in The Blue Bell, a smaller group set off for another circuit through the Old Hills, which is common land, and then along the Three Choirs Way. We returned through Deblin’s Green, passing Stanbrook Abbey nearby.  It didn’t rain at all which was miraculous.  Apart from the B road through Callow End, hardly a car was seen all day, apart from the GPO van. 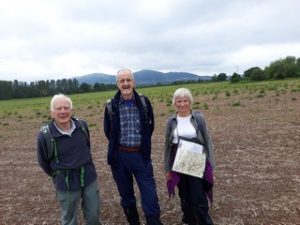 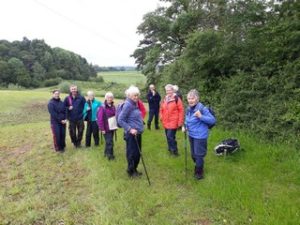 We all met and parked sensibly by the church in Tanworth in Arden on a cloudy day really pleased on the number and especially with three new members, Angela, John and now Mike. Marg (sensibly in wellies) had been promoted to lead the start of the walk to test her recce memory and led us down Bates Lane to the kissing gate left which had a diagonal view of a barn to the kissing gate which took us over the road to another kissing gate/bridge. Straight up the wet field to the right leaving the transformer pole on the left. The signed narrow overgrown path took us to an opening with a left bend onto a track by large houses including The Grange with views back to Tanworth showing the broach church spire.  A sharp right bend takes us down a track where some reckon they saw a roe deer. By a superior posh gate there is a kissing gate which leads us down and across the track (although the leader missed one left turn here) we gingerly walk a slippery plank and on through a very wet footpath. Once our trousers were wet it was a case of getting used to it as we followed a well-trodden wet grassy footpath through a coppice with plank after plank and bridges. The bad weather in recent weeks had brought many fragile branches down so lumberjack Paul helped clear our way. At an opening we spotted a tree on the right showing a “danger” sign which appertained to shooting taking place here. The birds were chirping away to keep up with our group’s chattering.

We walk for some time in a thin coppice steadily going uphill until It opens out onto a grass exit onto the roadway. We take a small break on a large log at Fordeland (road sign “beware of elderly”). So, we pass by Mockley Manor (Nursing Home) on left and into a left kissing gate to walk up a steep slope and bear left along the ridge where another kissing gate and double plank to another kissing gate gives great views of countryside -so quiet. We take our coffee break on three benches dedicated to dogs Hadleigh, Maddison and anon dog. The next kissing gate is visible and goes down to woods, bearing left to a bend where large trees were down from storms. Through the heavy metal gate where we see a train go by at Mockley Wood on the West Midland track. Signing for this walk was exceptionally good (even if the footpaths were overgrown in places) and this is a lot to do with Solihull Ramblers as this picture shows. Over the newly made bridge covering the stream and up to a mucky farm with the railway bridge for Danzey station (GWR 1908) which is an “only request stop”. From the railway bridge we take a right along the road where an old windmill stood (now at Avoncroft). We turn left by Lockerbie house and go down the hill. At Bickers Farm we go left to a kissing gate – through the gateway and up left to two KISSING gates. The kissing gates and bridges were now getting a little muddy (bullocks in gateway were kept under control). Walking across a couple of grassy meadows we see a hidden left stile/gate which takes us under the railway tunnel. More kissing gates and bridges, we can sense we are close to the church and hear lunchtime jollity from the children at school. We keep left of private land and take left steps up grassy field to church. At a convenient bench in the churchyard, with a panoramic view of Arden countryside, Marg is invited to tell the group about three famous people who once lived at Tanworth in Arden. Firstly, the songwriter Nick Drake songwriter and singer, “A Day Once Dawned” he died very young and his grave is there underneath a huge tree. Secondly, the motorcycling racer Mike Hailwood who tragically was killed in a car collision nearby in 1981 (as foretold to him by a fortune teller) and lastly, Jack Hood a boxer with 48 wins (1902 – 1992) and who ran The Bell Inn in Tanworth in Arden for 36 years. Marian gave thanks to leaders and most then regathered at The Harvester Mappleborough Green for lively chatter over lunch.

The meeting place for this walk was the Robin Hood Pub, Gloucester Road, Castlemorton.  It was a beautiful sunny morning as we crossed the B road to walk up to the Hangman’s Hill and Herefordshire Beacon – quite a climb but the beautiful views at the top made it worthwhile.  We then descended from British Camp to the busy refreshment kiosk where we had a welcome rest.  We then walked back to the pub passing British Camp reservoir on the way to meet Frank who had arrived for lunch and the afternoon walk.

In the afternoon, we crossed to explore Castlemorton Common which was once part of the vast Royal hunting grounds of the Malvern Chase. Much of Castlemorton is today within a designated Area of Outstanding Natural Beauty and protected as a Site of Special Scientific Interest (SSSI) due to some very rare fauna and flora living within its boundaries.

However, the stiles in the parish and some of the footpaths were not well maintained, but gates were easily climbed, and the walk completed. 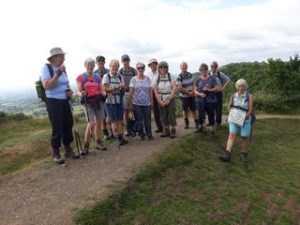