At last a change in the weather and glorious sunshine greeted us as we gathered by the Elgar Inn at Earl’s Croome. Gently strolling through meadows, with orchids and a profusion of buttercups and dandelion ‘clocks’, we reached a bridle path. This shady, tranquil route, which was originally an old road, led us down to the River Severn. Joining the Severn Way, we followed the river to Upton upon Severn. A coffee break was taken here, next to remnants of the old stone bridge. The first bridge in Upton was built in the 15th Century and was rebuilt in the 19th Century. The present bridge was built in 1940, a few yards upstream of the old one. It is a larger version of the bridge at Fladbury.

After admiring the view of the ‘Pepperpot’ and watching people paddling up and down the river, we left the Severn Way and walked past a large marina to the small village of Ryall. The footpaths now crossed arable land rather than pasture. We crossed two large fields (thank goodness it was dry underfoot) to arrive in Earl’s Croome. This small village in mentioned in the Doomsday book as Crumba.

The welcome shade of a young arboretum led us back to our starting point, where ten of us enjoyed lunch at the Elgar Inn. 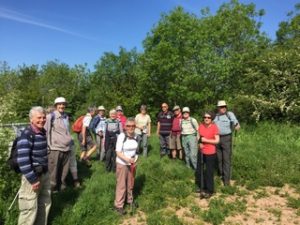 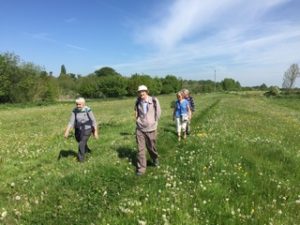 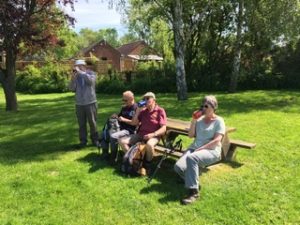 “Five have a spiffing time around Sapperton!”

The temperature was warm, the leaves were bright green, the going was good to firm and fizzy pop was guaranteed at lunchtime, but only five members were tempted out to assemble in The Daneway car park. Nevertheless, we cheerfully put our best feet forward to explore the steep sided valley formed by the River Frome cutting through the high Cotswolds plateau. Underneath these hills lies the, now silent, Sapperton canal tunnel, linking the Severn and Thames Valleys; the railway tunnel is still active. So, our first stop was to admire the imposing western portal of the canal tunnel.

We breasted the eastern slopes of the valley at Sapperton church and set off north-east on the Macmillan Way. Crossing beautiful open parkland, we spotted on a spur, Pinsbury Park, a sixteenth century, stone-built manor. Emerging from its carriage drive, we entered the Bathurst estate. Lord Apsley generously allows considerate walkers onto his paths; therefore, we were able to cut through his forest plantation and hit the road taking us down to Edgeworth.

Lifting the latch on an ancient gate, we re-crossed the river and ascended the drive while swathes of wild garlic assaulted our senses from both sides. Edgeworth Manor and its pretty neighbour, the parish church, are hardly changed since Jacobean times. We had moved quickly, so it was time for a mid-morning refreshment break on the churchyard bench.

Turning south, the group pointed out to Peter the footpath he had overlooked in his recce, but this proved to be the downfall of his navigation. After scaling a couple of dodgy stiles, we found ourselves picking our way across a paddock festooned with electrified horse fences and into preparations for a polo match! Our exit was barred by electrified gates, but a kind groom entered the keycode and we escaped! The return to The Daneway Inn was across wide and airy meadows covered in buttercups and dandelion clocks. At their end we pitched down the steep scarp into the nature reserve. Here Val took exception to resting on a carved bench dedicated to Prince Charles, so we preferred a picnic table outside the pub instead. The huge roast chicken lunch defeated Roger.

Afterwards we headed south-west climbing an ancient trackway through Sapperton and Frampton woods, where we were concerned to see the amount of dieback disease in the ash copses. On the summit a field of apparently impenetrable cereal faced us. After a few false starts, we located the straight track through to Frampton Mansell. Mike and Roy were taking a keen, professional interest in every Cotswold stone wall we passed for a project they have planned. We took time out to admire the architecture of the village church, designed to look at home in the foothills of the Italian Alps. With its extraordinarily wide aisle, Val thought the church would make a wonderful location for any bride’s wedding.

The next section proved to be the steepest and riskiest of the day: first we had to “Stop, Look and Listen” to negotiate the naked railway tracks and then jump down a sheer bank (sprinkled with blue Bugle flowers) onto the canal tow path. From there it was an easy return: classic Sunday afternoon rambling. It took us past a succession of deep, but dry, canal locks and alongside luxuriantly overgrown canal beds, with Kingcups and yellow flag irises in flower. Coming down the path towards us were a couple with dogs and a large Cotswold ram! We learned he was “Lucky”, and he regularly walks this path with his keepers.

Our select group reached our destination sound in wind and limb, having covered 11 miles of varied landscape. As the only committee member present, Mike gave a gracious vote of thanks, which was supported by general acclaim!