On a bright but decidedly chilly morning (6⁰C), fifteen ramblers left the car park at The Bulls Head, Inkberrow, and made for Stock Wood. Our route took us across fields with newly sprouting crops, through pastures with inquisitive horses and along good tracks. As promised by the leaders, there weren’t too many stiles on this morning’s walk. The lack of recent rain made for a dry crossing of a large wheat field on a recently re-instated bridleway (thank you, farmer!) before taking our coffee break just outside the hamlet of Dormston. Suitably refreshed, we continued on our way, stopping briefly at the delightful 13th century church of St Nicholas with its striking timber-framed tower.

Those at the head of the group spotted three deer close by, and after their initial surprise at the intrusion into their territory, the agile creatures bounded off into the undergrowth. Passing a very attractive B&B at Hill Farm House, we were now on the Millennium Way, which we followed back to Inkberrow for a well-organised and tasty lunch at The Bulls Head.

A much smaller group assembled for the afternoon ramble, having discarded jackets, woolly hats, gloves and scarves that were requisite for the morning ramble and true to the weather forecast, the day was becoming very warm (18⁰C) and sunny. We skirted the village by way of the sports field before picking up the Millennium Way again. Lovely paths took us through the beautiful hamlets of Morton-under-Hill, Holberrow Green, Bouts and Mearse, the landscape dotted with black and white timber-framed houses, some thatched.

At this point it ought to be said that, as promised by the leaders, there were a lot of stiles on this afternoon’s walk!

The day seemed like a celebration of spring – fields of gambolling lambs, a new born foal at Lower Bouts Farm, trees and hedges coming into leaf, spring flowers and blossom to delight the senses. Even a slightly muddy bridleway and a series of difficult stiles on our return route to Inkberrow couldn’t diminish the feeling of a day well-spent in good company, in the glorious Worcestershire countryside. 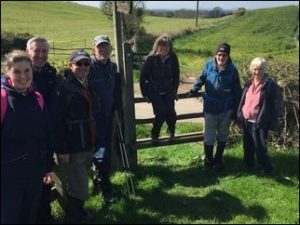 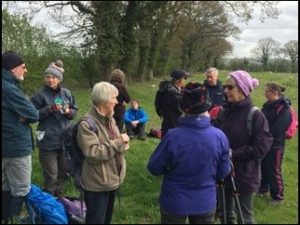 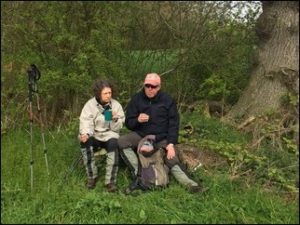 It was good to wander up Gigbridge Lane, to the peace of the countryside, after leaving busy Pershore. We were greeted by wonderful views of both Bredon and the Malvern Hills as the newly born lambs leapt around. We followed the route over the Gigbridge which was where coffins were transported from Drakes Broughton, for burial in Pershore in medieval times. After crossing the B4084 we descended by Ufnell Bridge to join a clear path through pasture and by a small stream.  We walked by the sprawling Caddicroft Farm and turned in the direction of Besford Bridge. Ramblers were thrilled to see bluebells bursting into life, listen to the twittering birds, and note the many other signs of Spring in Tiddesley Wood. We wended our way down towards ‘The Holloway’, and took an ‘historic’ route back to the town centre, passing Barbara Cartland’s childhood home, the Talbot Inn, where both Cavaliers and Roundheads were entertained during the Civil War, and the Almonry, where pilgrims to Pershore were given hospitality by the Benedictine monks at Pershore Abbey from the 11th to the 16th centuries. 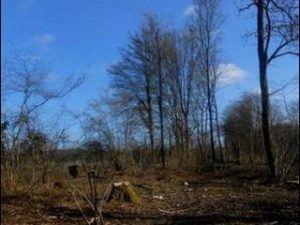 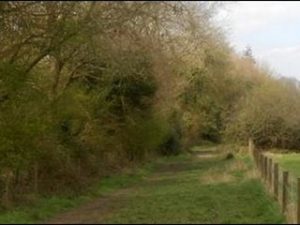 Nineteen ramblers gathered in the car park of the Gardeners’ Arms in Alderton under grey skies and a morning chill – a far cry from the mini heatwave of the previous weekend and the horrendously wet and windy weather of the day before. Thankfully the skies eventually cleared and the air warmed in the afternoon. I think members would agree that the most memorable part of the morning walk over Dumbleton Hill was the spectacular carpets of bluebells, glowing in the woods even in the dull light.

After a copious lunch at the Gardeners’ Arms, we set off southwards towards Dixton Hill. The flat meadows leading there were surprisingly dry, despite the heavy rain of previous days. Climbing over the shoulder of the hill we passed the impressive Dixton Manor built in 1555 and owned for many years by the Hambro family. We took a breather enjoying the panoramic views and warm sunshine, before returning across the fields to Alderton.