“Partridge but no Pear Tree!”

The forecast of heavy rain did not deter a dozen hardy walkers from gathering in Cold Aston on a day when low cloud soon lifted to reveal views of the surrounding countryside. Our ramble in the South Cotswolds was close enough to tempt Roger and Tony, our two members from Wiltshire, and guest Dave, also from Wiltshire.

Quiet lanes and good grassy tracks, with no stiles, meant we were able to make steady progress across the beautiful rolling countryside. We disturbed several coveys of partridge and a lone hare, and although we saw lots of red kites on our recce, we only encountered a couple in the whole day.

After our coffee stop at a conveniently placed shooting hut, we passed through the village of Farmington with its massive sycamore on the village green. Light drizzle started to fall as we reached the outskirts of Northleach. Our booked lunch was waiting at The Sherborne Arms and there was even time for sticky toffee pudding and ice-cream for some, whilst others took time to visit the magnificent Wool Church. Some even managed a quick trip to the cake shop!

Rain was now falling heavily and umbrellas were swiftly opened to ward off the worst of the downpour. Our route took us out of the town past the Old Prison and into open fields. What had been a pleasant field crossing was now a mud-clinging path, so we decided to use a quiet lane as an alternative (universally appreciated) as we walked through the delightful village of Hampnett and on towards Turkdean. In the latter, we crossed a swollen stream by a small bridge, before a steep ascent on a sunken track to reach a bridleway which we followed back to the cars in Cold Aston.

A comment from one of the group: ‘What an excellent day’s walking it was, in the lovely Cotswold landscape.’ 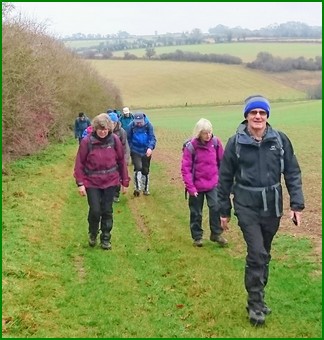 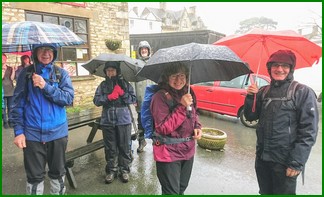 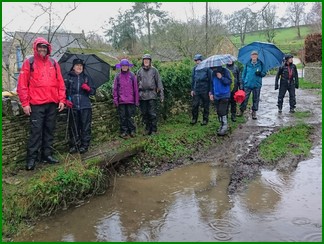 If you use GPX files you can view the route of this walk by downloading the files.

“A Florentine (tower) for Christmas!”

We met on a fine, bright morning and started our ramble from Church Lench village hall car park following the Wychavon Way. With good views of the rolling countryside, we walked over fields and downhill to cross the footbridge over Whitsun Brook, before going uphill and through Yeald Wood with the footpath leaving the Wychavon Way here, and bringing us out on to the road at Rous Lench. Here, around the picturesque village green, we looked at the half-timbered Victorian letter box, the Millennium shelter and a substantial well before going to look inside the church. 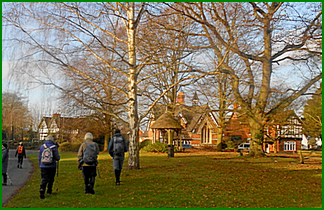 On leaving the churchyard we continued our rambling through parkland (with Rous Lench Court on our right although we couldn’t see it behind the trees), before climbing a short, steep slope to have our coffee break by the walled garden with excellent views….but a bit windy up here!

We then walked past the Florentine tower, and the out-buildings which had been converted into desirable residences, and on to the road which led us downhill to traverse a very long and straight grassy bridleway, after which a track led us out to Atch Lench. Here, we took field paths to amble back to Church Lench passing Toy Cottage, originally a one-up and one-down dwelling allegedly housing a family of fourteen and then the school, with its carved messages of learning across the front wall.

If you use GPX files you can view the route of this walk by downloading the files.

The weather on the previous day had been awful so we were very pleased that the rain had stopped and the sky was bright and clear. It was good to welcome Bob on a flying visit from Taunton to meet up for a family party.

Charles Menteith had planned the walk and we had recceded it with him before his departure to his new life in Poland. We set off around the fishing pools to Little Rissington and headed south along the Windrush valley to Great Rissington where we stopped on the village green opposite the Lamb Inn for coffee and stollen.

The walk continued over farmland and tracks and the ground was pretty good for December. Our lunchtime destination was the village of Sherborne set in a well kept parkland with church, school, village club and shop/cafe where we were served tea, in lovely china cups, and cappuccinos and Geoff persuaded the “lady in charge” to let us eat our sandwiches there as they were not serving any hot food that day. The charming Polish lady who served us had done the opposite to Charles and come to the U.K. with her husband and daughter as they were unhappy with the government in Poland – we said nothing! Sherborne House and Lodge Park were bequeathed to the National Trust in 1982. That may account for all the new gates and stiles and Alan reminded us that Springwatch and Autumnwatch had filmed here since 2017.

We turned and headed north across the country landscape and apart from all the sheep we saw plenty of pheasants and a red kite. The final section was walking along a lane into Bourton and we didn’t need the ‘gilets jaune’ as it was still light until we reached the cars. The rain just started as we headed back for the good food and comfort of the Crown & Trumpet in Broadway.

We will miss Charles leading his lovely walks in the Cotswolds but hear that he has already joined a walking group near his new home and is learning to walk on the snow with mini crampons and sticks and winter boots with softer soles, as normal ones get hard at low temperatures. We wish him good luck with that! 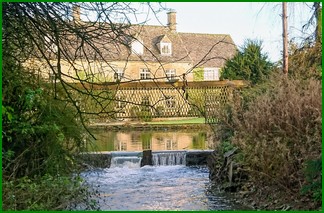 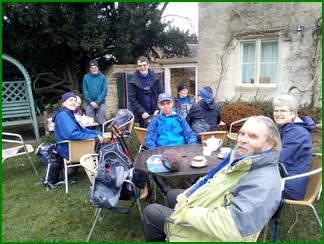