“Somme Muddy Fields Out There!”

After a heavy overnight frost, even at 10.00 a.m. the temperature in the West Worcestershire countryside had hardly risen above freezing. So, as we set off from The Masons Arms west across the fields to Martley, the ground was hard and the puddles frozen. We aimed for Martley church, a soft red sandstone building of Norman origin with a fascinating history. Skirting the village, we quickly gained The Nubbins sandstone ridge. Alan told us that Martley was the first village to be awarded “Welcomes Walkers” status, which we would love to achieve for Evesham. It is also a nationally renowned geological site, lying on the East Malvern Fault which brings ancient and more modern rocks into close proximity.

The Noak, once the manor house, is now a farm where olive trees are bred and grown in huge pots. Our first real ascent of the morning was onto Pudord Hill through a tunnel of trees obscuring our view of the valleys on either hand. However, as we arrived for our coffee stop on the top of Rodge Hill, the Teme Valley was laid out below us. The winding course of the river could be traced by the thick mist hanging over it and the details of the surrounding hills and counties were shrouded and mysterious; a soul-stirring view. 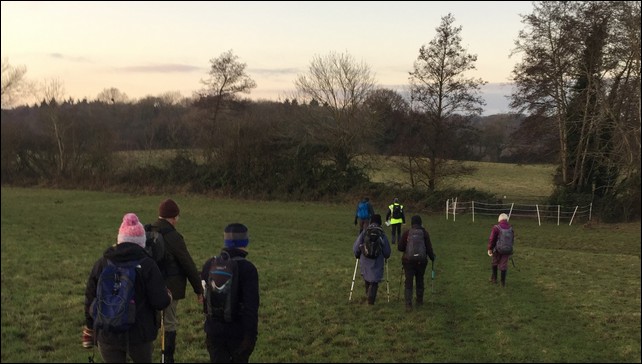 As we descended the ridge, we left the Worcestershire Way but followed the switchback Geo-Park Way through an old quarry below Penny Hill. The geology here is very dramatic and at one point we were walking below the retaining wall of a dammed lake, with sensors driven into the ground every hundred yards or so, which wasn’t terribly reassuring. The return to the pub crossed the flat countryside of the Severn Vale. The most notable feature was the density of stiles separating us from our lunch.

The Masons Arms looked after us well; we were very cosy in the snug. The Seniors Lunch proved excellent value and (let it be stated for the club archives) a couple of members took advantage to enjoy a dessert.

The least said about the muddy state of the fields walking to Wichenford Court the greater the chance that Peter will be asked to lead again. We had come to see the 17th century half-timbered dovecot with its 557 nest boxes inside and found that it had recently been re-rendered and was now protected by sacking. The only doves in residence were paper ones.

With the sun setting and the temperature dropping, we hastily returned across cleaner fields. For the resident horses we were apparently the most exciting beings they had seen all day. They charged about the fields in a disconcerting stampede. But being ERC, we showed them we were made of sterner stuff and arrived back at the car park in one piece. It was lighting up time before we set off for home. 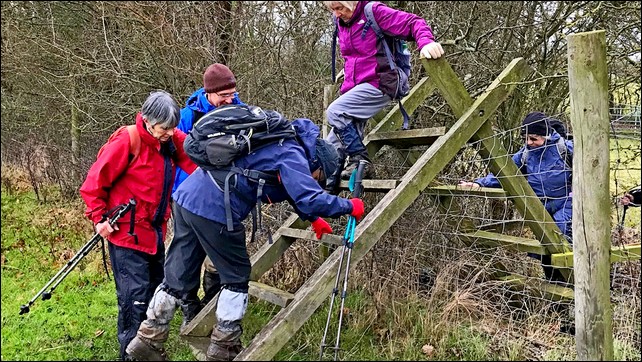 We began our ramble from the Red Hart, Kington and took the footpath opposite the pub which led us round a couple of fields before turning left downhill onto a tarmac lane – which I believe the locals call ‘Featherbed Lane’. This brought us out to turn right onto the A422 for a short walk in a westerly direction.  We crossed the road and now facing south, made our way to the left of the Flyford Arms and up a grassy short hill and though a coppice to Flyford Flavell. Crossing a road, we climbed up a few steps to a footpath opposite and walked along fields of pasture before turning right and rambled westwards all the way along the ridge to North Piddle.

The sun came out and we had marvellous views of Bredon Hill away to the east, and in the distance the Malvern Hills in the west and the occasional glimpse of the stunted tower of Grafton Flyford church on our right.

We now took a right turn heading north, down a track, round a field, and across a narrow strip of field to enter the well-kept grounds of Grafton Mill where we lingered for a while to look at the Mill wheel and watch the geese and ducks. Leaving the Mill, we were back on the A422 for a few minutes before turning left and walking northwards up the road to Grafton Flyford church, which wasn’t open, but we made good use of a bench and the porch to have a coffee stop. 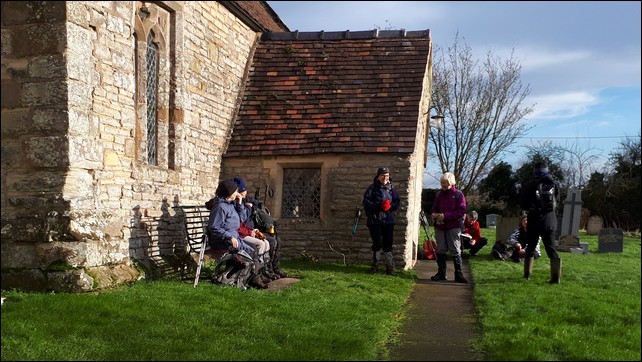 The wind was bitingly cold up here and we were soon on our way again.  We set off down a grassy field and out onto a narrow road which we followed on up to the next footpath which led us through the garden of Rectory farm where we then traversed a very wet and muddy field before coming out onto the road.  On the left we passed ‘Widow’s Cottage’, formerly three small homes for widows and widowers, then continued along the narrow stretch of road up College Bank before turning right onto a bridleway heading east, which runs between ‘Woodend’, a former farmstead, and ‘Oakanmore’ built on the site of the thatched ‘College House’, gutted by fire.

The bridleway was a track that carted raw materials to the village of Dormston – where we were now headed – to where many outworkers used to be engaged in the Worcester glove trade. The part finished gloves were then returned to the city factories. 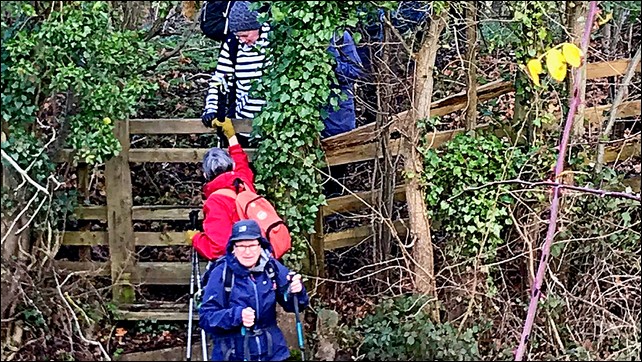 It had started to drizzle with rain now but Grafton Wood, home to the brown hairstreak butterfly, was very visible away to our right. We left the bridleway – before returning to it – for a short while to follow a footpath running parallel on the left.  Some very muddy, deep puddles were then negotiated with care before we left the track and turned off to take the footpath on the right down towards Dormston. At this point we were faced with what I call a staircase type of stile – up one side over the top and down the other side.  It was quite tricky as it was open treads spaced well apart and angled inward on the way down but everyone managed it very well.

We then weaved our way down the outside of Lower Kites wood, through a field and out onto Cockshot Lane and back to the Red Hart where some of us stopped for lunch.

We had rather a lot of stiles during this walk! 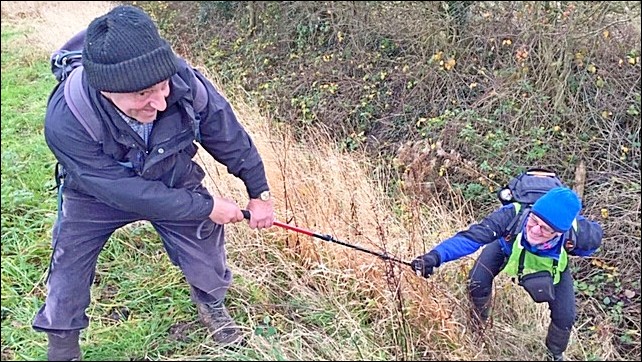 It was pleasing to see so many ramblers out on such a cold miserable December day, however by mid-afternoon, we actually saw the sun. It was of some concern to me that I had led the same ramble a few years ago – quite unfounded as according to my ERC file it was October 2007 with Heather as my co-leader and the late Ernie Shorthouse as Host. 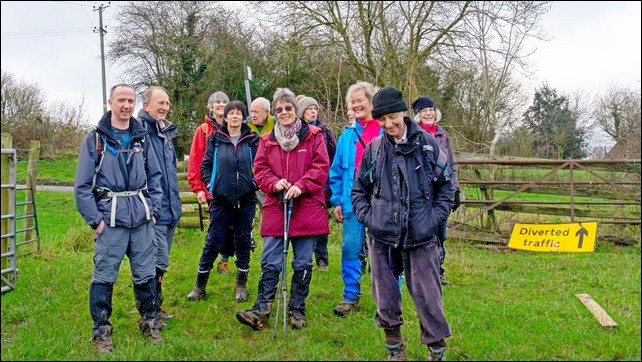 Departure was the Waitrose Car Park in Alcester where we headed towards Newman’s Plantation on the Ragley Estate and thereby hangs a tale! Owing to the atrocious weather of the preceding few weeks, our route had to be modified briefly as a gateway access was under 15 inches of water. So with Peter’s help, we crossed a steep ditch safely before joining up with the original path.  The walk took us past Thornhill Farm and Woods and up to Weethley hamlet with misty views of the surrounding countryside, before returning to Alcester and dining at ‘The Turks Head’. 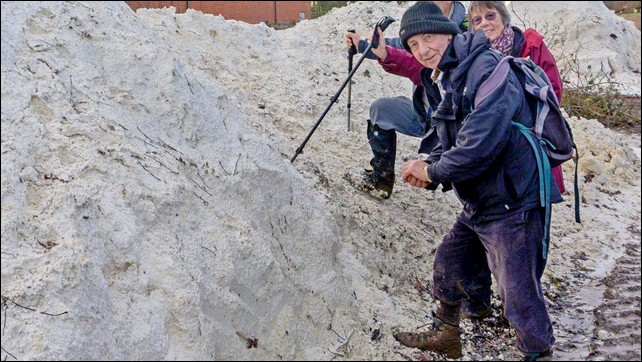 After lunch we booted up for the afternoon walk through Oversley Wood, Exhall and then back to Alcester, passing by the beautiful alms houses close to the church. I must congratulate all those who braved the elements to join me on a wet and muddy Sunday stroll through some of Warwickshire’s most beautiful countryside.