“Distance changes utterly when you take the world on foot….Life takes on a neat simplicity, too.”

Bill Bryson “A Walk in the Woods”

The day was bound to be hot; the last month had taught us that. The five of us were keen to be off while a breeze still moderated the sun’s radiation. The theme of our walk was the circumnavigation of Stow-on-the-Wold via its surrounding villages. The Gloucestershire Way took us west from the Fosse Way to the River Dikler at Upper Swell, where we turned south through the neat estate once owned by the Massey Ferguson family. On reaching Lower Swell we found the village hall open for refreshments, which on a hot day was too tempting to ignore. So we sat outside with our drinks and demolished a plate of biscuits; the locals just smiled. The next stage neatly took us to Hyde Mill where the Macmillan, Heart of England, Monarch’s and Gloucestershire Ways all cross, which perhaps briefly confused our leader until Alan put him right. Soon we were moving east, carefully crossing the roaring Fosse Way again and into the cool shelter of the old track to Maugersbury. We stopped to take on water at a bench dedicated to the last stationmaster of Stow-on-the-Wold, appropriately overlooking the site of his command. Aiming next for the windmill on Martin’s Hill, we stopped to read the war memorial dedication on a huge sarsen stone at the Stow Rugby Club. It was downhill to Upper Oddington, where we turned north into the Evenlode Valley, everybody moving well despite the best efforts of the sun. Paul helped us identify several species of butterfly rising out of the hedges and dried grasses. Farm tracks brought us punctually to the wide village green at Broadwell, decorated with two more sarsen stones. Thankfully, The Fox welcomed us into its cool bar where Donnington Ale washed down our lunches.

When the landlord told us that the bridge had been repaired at the Brewery, we rashly agreed to include it in our route despite the extra length. The delightful manor at Donnington and the Opera House at Longborough (our most northerly point) were both behind us as we crossed the watershed back into the Dikler Valley. Overlooking the Brewery by the stream we met a chatty Dutch couple successfully geocaching. A short stretch on a country road brought us full circle to Upper Swell and the steady kilometer climb back to Stow-on-the-Wold. Our various electronic devices could not agree on the final length of the walk, but agreed it was between 12 and 13 miles. The team had achieved it all in true ERC tradition, lubricated by lots of drink (water), chat, good humour and sun cream. For some it was also a useful warm up for our backpacking weekend on the Sandstone Trail. 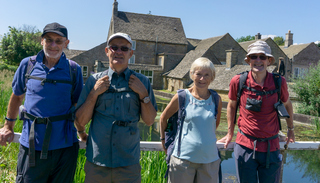 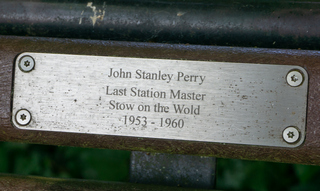 If you use GPX files you can view the route of this walk by downloading the file.

The heatwave continued but it was a little fresher as 20 walkers arrived at the Wheelbarrow Castle pub in Radford for our 5.8 mile walk. Quite a lot of the scorched grass had been cut making the walk easier than on our previous recce. We headed east across the fields to Abbots Morton then turned through Goom’s Hill to Slade Wood. It was fortunate that the ground was baked hard as we negotiated the churned up surface. Alan stopped to advise the landowner about permissive footpaths as we paused for a drink break before heading down to Rous Lench. We recalled that this was Gerald Farquhar’s favourite view with the Malverns in the distance and the small lake and parkland of the Court in front.

We walked through the churchyard of St.Peter’s Church in Rous Lench which was built in the mid 12th Century and has a very decorative doorway with zig-zag patterns and barley sugar columns. Then heading north we emerged on the road to return to the pub, some ramblers stopping to buy all the free range eggs from a roadside stall at only £1 for six. We were pleased with our inexpensive carvery lunch which everyone enjoyed.

Ed’s note: Thanks to our club lepidopterist, Paul J, we were able to enjoy watching the bronze green variant of the silver wash fritillary.

If you use GPX files you can view the route of this walk by downloading the file. 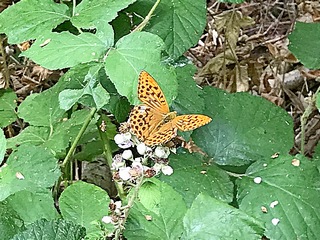 First we had Joiners, twelve members arrived to start the walk despite the dreadful weather forecast and the pouring rain. Yes, after weeks of dry, scorching conditions we had all hoped for rain but we did not want it today! Then there were Leavers – a mass exodus happened at lunchtime – some had only planned to walk in the morning, some had other appointments in the afternoon, and the rest were too wet to carry on. Who could blame them but in fact it didn’t rain in the afternoon. We still had some Remainers who carried on to the end, and some Undecideds who started walking then left via a short cut. Thankfully there were no Remoaners in the party and we all enjoyed the walk.

Miserden is a delightful village with a church, school, pub, shop and gardens. The Miserden Estate has an interesting history, owned by the Wills family since 1913, with Edwin Lutyens being employed to remodel it after a fire in 1919 and it still remains in private hands.

The route took us South West through fields of wheat and barley, some already harvested, past Sudgrove up and down hills, through woods, crossing springs and returning through Monsell Wood. At one stile a very persistent horse tried to get into our rucksacks looking for apples and nuzzled our necks which encouraged us to get over very quickly. We had a picnic lunch in the little shelter built around a tree and a nice cup of tea in the welcoming pub.

In the afternoon we head West to The Camp with stables and more horses, then back via picturesque Wishanger Farm and woodland at Warren Hill. On the way we spotted some big Roman snails which appear when it is very wet.

Completing our walk of 12.9 miles it was a treat to get out of our soggy gear and head for the Royal George Hotel in Birdlip for a welcome meal. 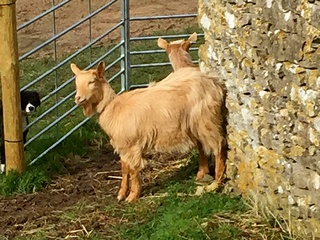 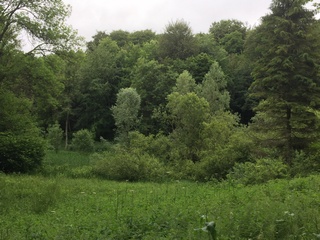 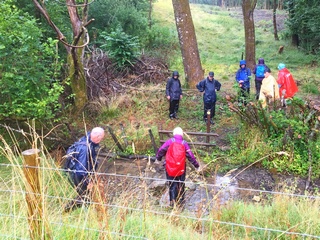 If you use GPX files you can view the route of this walk by downloading the two files.