On a frosty, foggy morning, we arrived at 9.30 a.m., parking at Warren Hall Park with the promise of a warm and dry day. Following the history talk by Val we admired the Engine Room Pump building and imagined how life was back in the 19th century for this busy area. We went over the first canal bridge to see Bumble Hole marina which led us to the voluntary led tea room/museum where we sat and enjoyed an inexpensive coffee/tea with one of us feeding seed to the ducks. Then passing the Pump Chimney again by the fishermen on the ponds, to the car park, crossing the A4171 and up the footpath, passing one of seven canal ventilation shafts which led us to the riding stable, where more ducks from another pond were fed (a lot of ponds which are mainly man-made from quarry sites). Bearing right up the tarmac path to bear left before the path’s corner and we walked carefully across the start of Dudley Golf Course. Here we are afforded a panoramic view over Dudley and to the west to the Clee Hills. On leaving the Golf Course we take a right to come down a very long steep City Wall road which gave us massive views towards both commercial and residential urban West Bromwich. We take a left along Birmingham Canal and onto the Gower Branch canal passing one of the most famous Hindu temples (largest in Europe).

We follow the canal towpath, under Brades Hall bridge to a busy road, up the steps, over road bridge and on the other side of the canal to Moseley Bridge then right to Furnace Bridge where commercially it gets noisy, even on a Sunday. Then Albion Bridge, to the other side of the canal, going left up the canal to a staircase and on to another canal bridge. We meet Pudding Green junction bridge by a steel works and go over this footbridge,noticing that these canal sides are filled with bull rushes. We see a signpost in the canal “Tame Valley 1.5 miles and 8 locks. Then we reach Rydens Green which is a very low bridge. We sit at the lock side and eat our picnic, whilst watching a man dismantle a break lining from an abandoned trailer which he tells us he owns but the trailer had been vandalised.

To avoid a busy road junction we go left off the canal via two big black metal gates leading along a track by a dismantled warehouse site and find our way onto the street opposite the Church which neighbours Farley Family Park, where the men in our group had a trial run on the exercise equipment. Up through the park and left down steps to go right onto an old housing estate where we take a left and cross the road to see blue garages.

Through these, and into a tree lined park, we bear left to lead us to a track and onto a bend around a coppice and over a footbridge to bring us to the Nature Reserve Sheepwash on the right and then a railway tunnel on the left. Through this dark tunnel and up the bank to the Overhead Power Line. Under the Line is the canal again. Walking along the towpath to Toll End Bridge, we cross over the canal at Groveland Bridge and behind the Canal Holiday Lets which have steps over and down the other side of the canal. Netherton Tunnel soon is in sight and we begin the 40 minute walk through, watching for puddles with our torch. A 5-minute rest at the end of the tunnel where we are told about the £1.5m restoration of the tunnel and then back up the steps to the Engine House and car park making the ramble 11.3 miles. Most of us made our way to the Half Penny Farm restaurant in Joseph Street for an early roast dinner. 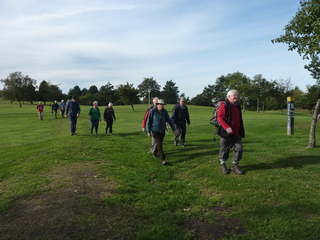 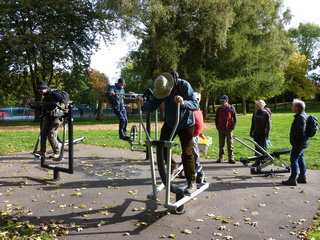 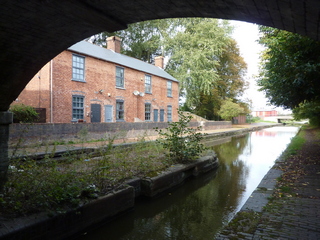 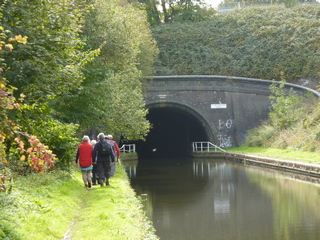 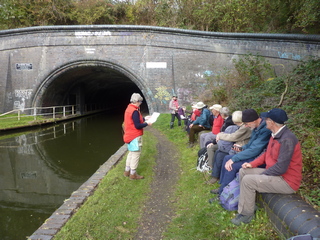 “Last of the Summer Sunshine!”

Making the most of a beautiful warm, sunny autumn day we set off from The Coach and Horses pub in Longborough, heading north along the Heart of England towards Bourton on the hill. The autumnal mists quickly cleared to give lovely views of a landscape tinged with gold. After passing through a gate with an unusual handle shaped like a duck, Sezincote house came into view. Sezincote was designed by Samuel Pepys Cockerell in a Neo-Mughal style and built in 1805. The poet John Betjeman used to visit whilst a student at Oxford, and captured Sezincote’s charm in Summoned by Bells:

“Down the drive,
Under the early yellow leaves of oaks….
the bridge, the waterfall, the Temple Pool
and there they burst on us, the onion domes.”

Sezincote is unique. Well worth a visit if you have not already been.

Just before Bourton on the hill, we left the Heart of England way and followed footpaths along the edge of meadows, until we picked up the Monarchs Way which led us back to Longborough. Before lunch at the Coach & Horses we looked around the village church, which is a fine example of a typical Cotswold wool church.

After lunch at the Coach & Horses, which was first frequented by Evesham Rambling Club over 70 years ago, we set off towards Donnington. After a short climb we reached a monument to the Battle of Stow. The Battle of Stow-on-the-Wold took place in 1646 during the First English Civil War. Here, we had a short rest and soaked up the last of the summer sun before heading into Donnington and returning to Longborough. 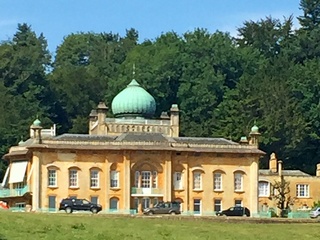 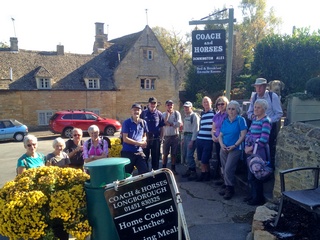 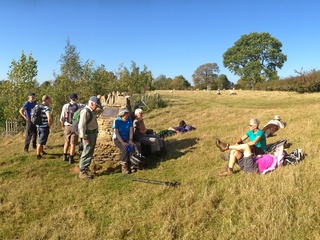 Twelve ramblers left the Star Inn at 10 a.m. and were joined by the rest of the party at the Bridges picnic site. We walked through the back of Pershore College & down and across farmland heading for Comberton Golf Club. Got slightly off track at one stage owing to the fact that the leader failed to recce the walk. Had coffee at the Golf Club in lovely sunshine. Made our way back via Comberton Quay to Pershore without too much trouble. Superb lunch at the Star.

On a cold but sunny morning, we gathered at Bulls Cross in good time for an early start. Charles remarked that this would probably be his last Sunday ramble with the club before his move to start a new chapter in his life in Poland. We wish him well.

The Slad Valley was looking at its best with its wooded slopes adorned in vibrant autumn colours. We were to follow the Laurie Lee Wildlife Way for much of the day, visiting the ten posts inscribed with his poems. As we encountered each one, we took it in turns to read aloud the evocative poems.

After a gentle descent on a good track, through mixed woodland of hazel, ash and beech, we crossed the Slad Brook, dammed to form a small lake. A steep climb brought us to our first Gloucestershire Wildlife Trust nature reserve at Snows Farm, one of four we would walk through during the day. We crossed another brook and gradually climbed along the side of a valley to reach our coffee stop. Further woodland paths took us to the small hamlet of Elcombe, before we headed through the wooded Laurie Lee nature reserve.

Another short, steep climb led us to the Swift’s Hill nature reserve from where we enjoyed far-reaching views towards Stroud and the Severn Estuary. We descended the steep slope towards Slad, admiring en route the ‘olde worlde’ garden of Knapp House. We soon reached our lunchtime stop, where we said farewell to Alastair. The remainder of us settled down in the apple orchard by a small pond, only to abandon the location on the arrival of two gentle, but inquisitive horses which took a liking to our food.

A long climb over Wickridge Hill and a descent into the Painswick Valley was rewarded with lovely views in all directions, including both Severn Bridges. Our final climb (“Are you sure this is the last climb, Alan?”) took us into the Frith Wood nature reserve and back to Bulls Cross. Here, we said farewell to Roger before making our way to The Air Balloon for a tasty meal.

Charles summed up the day as “Challenging, but enjoyable. The Cotswolds at its very best.”

Ed’s note: The walk title comes from a line in a book by Laurie Lee – As I Walked Out One Midsummer Morning

“I felt it was for this I had come: to wake at dawn on a hillside and look out on a world for which I had no words, to start at the beginning, speechless and without plan, in a place that still had no memories for me.”