A figure of eight ramble starting off from the Navigation Inn at . The mornings ramble was 6.3 miles long across attractive, undulating countryside. After lunch at the Navigation Inn, the afternoon’s ramble was 4.6 miles long and set off along the Stratford Canal before entering a green lane which led onto a path through woods. The route eventually bought us back onto the Stratford Canal for our return to the inn and our cars. 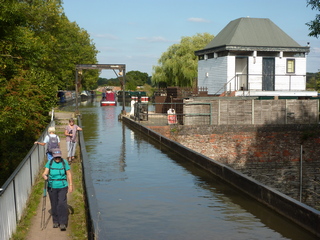 Fortunately the overnight rain had stopped and the morning was dry, but rather cool. Starting from the March Hare Inn car park we began our ramble down a surfaced lane passing an activity centre on route. Then over a cattle grid, and Mike pointed out Churchill Mill on our left. (Mike remembers working there when he was fifteen when the Mill and Mill race were derelict). Further on we joined the Millennium Way for a while which led us through a copse and then the churchyard of St John the Baptist at White Ladies Aston. A short stop here to look inside the church. Then onward, out of the village, round some fields and a garden, where we encountered our first tricky stile. All went well, and just before crossing the busy A422, we stopped for a sunny coffee break with good views of the Malvern Hills… with some of us spotting a substantial tree trunk to perch on.

Over the road, past Churchill Wood, we followed a well defined path across a field, though a gap in the hedge and down a few steps to clamber over another tricky stile. Once over this, we admired the far reaching view before heading steadily down the short hill, and traversed a few more fields before coming out onto Bredicot Lane. Turning right just before the bridge, we rambled through more fields to reach the village of Broughton Hackett. Here we meandered our way past the houses, before reaching the main road and the March Hare Inn, where we stopped for lunch.