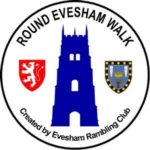 Arising from an aspiration in the Evesham Town Plan to improve access to the River Avon and make more of its attractions, as well as highlighting the town’s glorious heritage, Evesham Rambling Club decided to mark 70 years since its founding in 1947 by devising and executing a Round Evesham Walk.  Much-appreciated advice and extensive practical help was received from the Worcestershire County Council Rights of Way Team. Financial assistance was obtained through the New Homes Bonus scheme administered by Wychavon District and Evesham Town Councils. The club is also very grateful to several local landowners who have generously allowed permissive public access over parts of their land to complete the circuit. The core circular walk of about 5 miles starts at The Almonry and is waymarked with the distinctive ‘Round Evesham Walk’ discs. The link paths shown are additional and are also waymarked. The route can be shortened according to personal preference by joining or leaving at a number of convenient access points, or you can make use of an appropriate link path to return to the town centre. Alternatively, if you want to extend your walk by 1.5 miles, you can take the extension path from the Battlefield Trail leading to items 10, 11 and 12. The whole walk can be undertaken at any time of the year but must not be attempted if the River Avon is in flood. Look out for interesting wildlife on and around the river that inspired this walk. Notice also the orchards, now less extensive but for long a vital part of the Vale of Evesham’s story. Above all, enjoy the walk but please respect all the land you cross, much of which is in private ownership. Please…..take your litter home and leave only footprints. Keep dogs on leads and under close control at all times, especially near livestock. Take extra care crossing main roads. 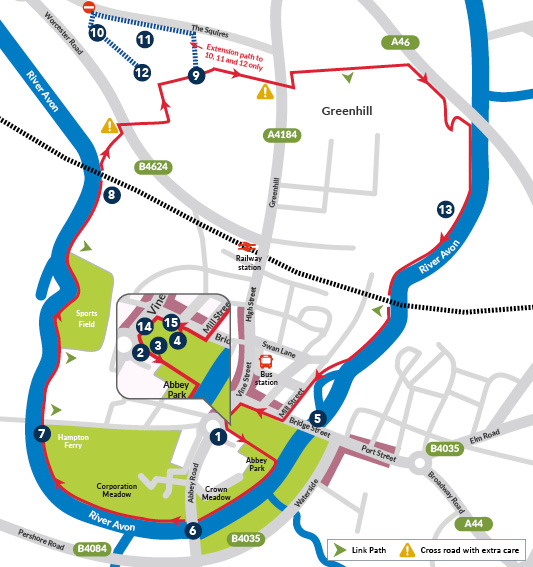 Founded c.701 by Ecgwin, Bishop of Worcester, and was one of the largest and richest Benedictine monasteries in England. Alternating between a monastic and collegiate foundation, it became a Benedictine abbey in 989 lasting until its dissolution by Henry VIII in 1539. A sequence of very interesting information boards can be followed in the Abbey precincts.

Dating from the C14, it was originally the offices of the almoner – a monk chosen to organise help for the local sick and poor. Now an admired local heritage focal point, it houses a tourist information centre and a fascinating town museum.

3 - All Saints and St Lawrence Churches

Founded in the C12 by the monks of Evesham Abbey to be churches for the two parishes into which the growing town was divided, they both stand within the Abbey precincts and share the same churchyard. When the two parishes were united in 1978, St Lawrence became officially redundant and taken into the care of the Churches Conservation Trust. It is usually open every day, free of charge, and very well worth a visit.

A free-standing campanile built c.1525-30 by Evesham’s last true abbot, Clement Lichfield. It was restored in 1951 by public subscription and again very extensively in 2015-16. Grade I Listed, it is considered a masterpiece of Perpendicular architecture with one of the finest peals of bells in the country. It is 110 ft. high, pierced by an archway that now leads you onward into the Abbey Park and the Montfort Memorial, then downhill to the riverside.

Linking Evesham with the eastern settlement of Bengeworth, the Workman Bridge (shown), named after the then Mayor and benefactor, was opened in 1856 on the site of the medieval one. The Abbey Bridge & Causeway was built 1925-28 of ‘Feathercrete’ – one of the first ferro-concrete bridges in the country. It was replaced in 2014 by a visually-similar construction more capable of carrying today’s volume and weight of traffic.

Linking Evesham with the western settlement of Hampton, it is a rare surviving example of a manually-operated chain ferry. The route dates back to the C13 when it was established by the monks of the Abbey to access their vineyards on Clark’s Hill. With its adjoining restaurant and car park, these days it serves mobile home residents on the Hampton bank and leisure users such as walkers of the Shakespeare’s Avon Way. More information on its website: hamptonferry.co.uk

The existing railway bridges over the River Avon carry the Great Western Railway North Cotswold Line (London-Oxford-Worcester-Hereford), which was opened in 1852 as the Oxford, Worcester & Wolverhampton Railway (hence, still showing their ‘OWW’ emergency identifier plates). The former Midland Railway (Ashchurch-Evesham-Redditch), opened in 1864 and closed in 1963, also crossed the river west of the station. Demolished in 1967, remnants of its bridge can be seen adjoining the existing one. 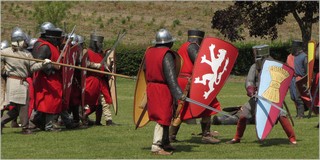 One of the great and defining battles of English history, it was fought on the slopes of Greenhill to the north of the town on 4th August 1265. Trapped in the town, the de facto ruler of England Simon de Montfort, Earl of Leicester, and his army were out-manoeuvred, out-numbered and mercilessly crushed by Prince Edward (later Edward 1) and his royalist forces. Simon’s dismembered body was buried close to the high altar of the abbey. This location, now in the Abbey Park, is marked by a fine memorial featuring plaques commemorating the 700th and 750th anniversaries of the Battle. Re-enactments of the Battle took place in 2015 and 2018. Detailed accounts of the Battle can be seen and purchased at the Almonry, which also houses a room dedicated to Simon and the Battle. The core battlefield site, signposted at the top of Greenhill, is managed by the Simon de Montfort Society and can be visited during daylight hours free of charge. Here you will find the waymarked ‘Evesham Battle Trail’ which is included in our walk. 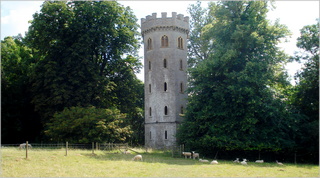 The Abbey Manor (private) was built 1816-17 in the Strawberry Hill Gothic style for Edward Rudge, a very influential figure in the history of the town. In the grounds in 1842 Rudge built the Grade II Listed Leicester Tower, a folly, now restored by Wychavon DC, and the Obelisk in 1845, commemorating the Battle of Evesham (see separate heading). Both can be visited on foot in daylight hours using a separate permissive walk accessed via a stile at the west end of The Squires (no through road). Please respect residents’ privacy. Keep strictly to the waymarked route and return the same way.

One of the town’s most popular and attractive features - and the inspiration for this walk - the Avon surrounds Evesham on three sides in a great U-shape. Flowing for nearly 100 miles from its source at Naseby in Northamptonshire to its confluence with the Severn at Tewkesbury, it passes through the towns of Warwick, Stratford, Evesham and Pershore. After years of neglect, the Avon was restored to navigation in stages between 1962 and 1974 allowing the river to be visited and enjoyed today by pleasure boaters arriving from far and wide.

The statue in the Market Place (near the Round House) is a representation of the legend surrounding the origins of the town. It depicts the swineherd Eof (or Eoves) on his knees covering his face at the apparition of the Virgin Mary, whose face is emerging from the canopy of trees.

Formerly known as the Booth Hall and perhaps originally an inn, this is a remarkable and exceptionally complete timber-framed building dating from the late C15. Sympathetically restored 1964-65, it is now a branch of NatWest Bank.

Public transport to and from Evesham

You can read a little more about how the club created the Round Evesham Walk by clicking here or going to the Working Party Page.

If you wish to report an issue with the Round Evesham Footpath or would just like to make a comment then you can email the team via: footpaths@eveshamramblingclub.org.uk

Click on the word DOWNLOAD below and your browser will open a printable version of the Round Evesham Walk leaflet.