Eight willing workers gathered in Atch Lench ready to construct a replacement footbridge across the stream between Atch Lench and Church Lench. Tom apologised that the bridge he was planning to bring had been taken by another member of Worcestershire's Footpath Team but not to worry, he had brought a 5 metre bridge instead!

We started to remove the previous rotten bridge but were soon thwarted by the large postcrete blocks that the bridge uprights had been sunk into. After Herculean feats of strength, the concrete was finally broken up and the old bridge removed.

The various slopes and hollows on the two banks resulted in much discussion on where this new longer bridge should be positioned - did we need an extra plank and where should the handrails go? Decisions made, we set to again. Tom was kept busy, especially when any heavy work would benefit from a pair of younger hands. Unfortunately for him, when his back was turned, one of the many donkeys in the field sneaked up and ate his lunch.

Eventually, the bridge was in place and Mike finished it off by nailing non-slip mats onto the four planks. He wasn't best pleased when we all trooped across the bridge in our muddy boots! It was now 4.30 pm, a little (!!) later than we expected, but we all agreed that the new bridge was 'fit for purpose'. 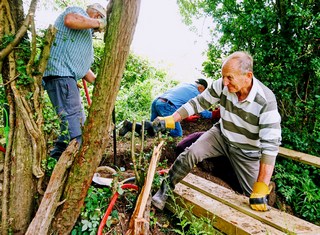 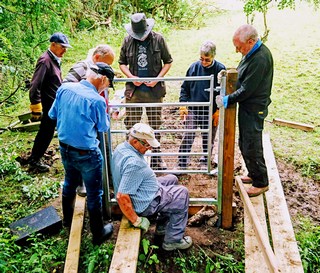 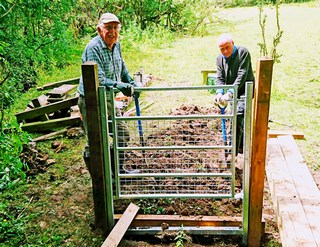 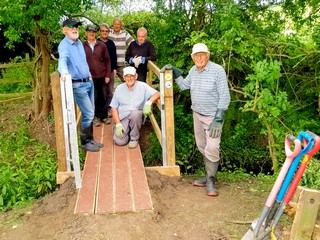