“Hatton Flight of Locks – The Stairway to Heaven”

16 members gathered at Hatton Country World on this lovely day for walking with blue skies, sunshine and a more pleasant temperature after the recent record-breaking heat.

We were soon on the historic Grand Union Canal for a short stretch before heading South East over farmland towards St.Michael’s church in Budbrooke. The walk passed the site of a mediaeval village and in the churchyard we saw war graves of young men from age 16 onwards sadly lost in wars of the last century. These men served in the Royal Warwickshire Regiment which had their barracks nearby.

Turning at the Warwick Parkway, we walked back along the canal towpath and enjoyed watching the narrow boats navigating the flight of 21 locks, originally opened in 1799, spanning 2 miles and rising 148ft. We admired the engineering feat of the “revolutionary” concrete lock system completed in the 1930’s by a workforce of 1000 when the original canal was widened to 14ft. to “keep up with the times” and allow industrial boats to bring their heavy cargoes of coal, sugar, tea and spices. The Hatton Locks Café, very busy on this sunny day, provided a tasty light lunch at a very modest price.

In the afternoon we followed the Birmingham Road before turning by Holy Trinity church, with its lovely wooden, carved Lych Gate at Hatton Green over fields to Little Shrewley. We squeezed through narrow snickets to visit the fishing ponds at Shrewley and the 433 yards long canal tunnel and accompanying horse tunnel before heading back along the quieter stretch of canal to John’s Bridge. We arrived at the cars just in time to miss a short shower and headed home.

Ed’s comment: There are a number of time lapse videos of narrow boats passing through the 21 locks on YouTube. Well worth a look! 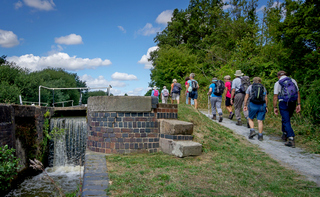 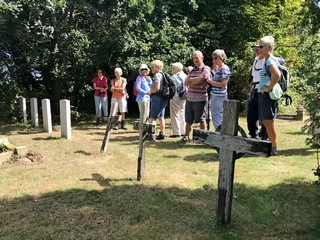 More of Peter’s photos can be seen in a Flickr album by clicking here or by going to the gallery page.

Setting off with a very fine view of  Abbey in sight, and photographed by Derek, we walked along Lower Lode to pick up ‘Bloody Meadow’, part of the Tewkesbury Battle Trail. Entirely by chance we came across a small group of Trail walkers led by an official Battle Guide who was persuaded to give us an impromptu briefing on the Battle of 1471 and the particular significance of the Meadow. He also informed us that the appellation ‘Wars of the Roses’ to describe that sequence of 15th century battles was a figment of 19th century touristic imagination as were the roses themselves! Who knew!

Pressing on and managing first to traverse the golf course and then avoid a large herd of usually inquisitive bullocks who fortunately ignored us on this occasion, we reached the Saxon settlement of Deerhurst with its wonderful church, where we had our coffee break, and neighbouring Odda’s Chapel – a truly remarkable survival now under the care of Historic England.
After that we simply needed to turn around and follow the mighty River Severn all the way back to Tewkesbury where we took a different route back to the cars which allowed us to view some of the spectacular sequence of knightly banners which adorn the town so colourfully. Come on Evesham – we could do the same! 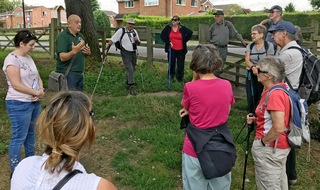 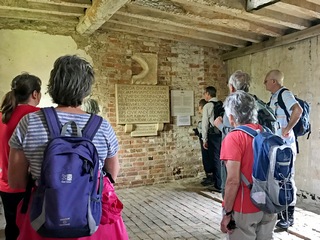